Story Behind the Story

Breaking Destiny is a tribute to one of my all time favorite books by Louis L’Amour: Flint. 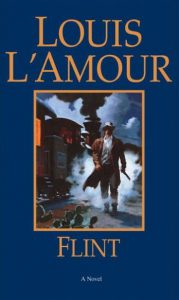 Not to worry, my story is science fiction… not a western!

As a kid, I read every novel L’Amour ever wrote, many several times (Flint at least 3 times). It’s been some 20 years since the last time I picked it up, but I have a leather bound edition of Flint that I plan to crack open the day I finish Breaking Destiny.

Anyway, there are three big reasons Flint stands so tall in my opinion. First, Flint is one of the few times L’Amour took a gunslinger out of the old west and sent him east. Second, it’s the only time I can recall L’Amour focusing on his protagonist at a young age. It was only one chapter–a flashback–where the hero was fifteen or sixteen, but it was pretty bad ass! I was maybe twelve or thirteen when I read it the first time, so I really identified and it left a lasting impression.

But what really did it for me, the thing that put this novel head and shoulders above his others, was the premise of a dying hero. A man facing death has little to lose. Normally, in a violent adversarial situation–such as war or a confrontation in a bar or a robbery–everyone involved shares one commonality: Nobody wants to die.

Because the urge to live is universal, certain calculations can be made. When a man robs a liquor store at gun point, typically he does not have to worry about the patrons. Nobody wants to die, so unarmed patrons will most likely keep their heads down and pray.

That’s just how it goes. Usually. But if you remove the fear of death because one person in the equation is already dead and might welcome a faster way out… all bets are off.

That’s what happens in Flint. The hero believes he is marked for death already. So when confrontation arrives, his reaction is wholly unexpected by the other party. Homeboy just don’t give two shakes about nothing, so he goes right up the middle and… well, it’s pretty epic.

This book is my way of paying homage to the late great, Louis L’Amour. As a writer, L’Amour is pretty much my ultimate hero. L’Amour never took himself seriously, never aspired to be a literary great. His only goal was to tell entertaining stories. And at that, my friend, he did a helluva job!

My ultimate aspiration in life? To one day spin a yarn half as good as his worst.