I dreamed I was on a Delta Airlines flight. A stewardess came to my seat and said: “Sir, would you please follow me? The pilot would like to speak with you.”

Naturally I complied with the strange request, following the lady down the aisle to the cockpit. The stewardess closed the door behind me as I went in. It was night time and there was no light on, but the cockpit glowed with thousands of lights on all the tiny little buttons. 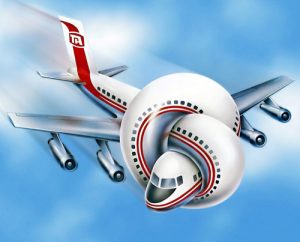 I was looking at the back of the pilot’s head, thinking something seemed familiar, when she turned around and said: “Surprise! This is my new job!”

It was my mom!

“What on earth are you doing here, mom? You can’t fly a plane!”

“I know, it’s crazy isn’t it! I really needed a job and, praise the Lord, He provided!”

“Oh don’t worry, I bought a flight simulator for my computer yesterday. Sit down, we’re about to land, this will be fun.”

Numb, I sat down and strapped in. Mom continued to chatter on happily, telling me all about the Saint that got her this wonderful job. She talked, but I stared out the window with dread.

Suddenly mom pushed some levers forward and the plane’s engines roared with power as she pulled back on the yoke. “Yep, yep… they said that runway was really short.”

Even as the engines were roaring to climb, mom turned the plane sideways in an attempt to loop back around.

“Mo-o-m! You can’t come around so tight, there is no way you will be able to catch the runway again,” I said. Sure enough we were way off on the next pass.

“Oh I’m so embarrassed. Those people in the tower must think I’m so dumb,” Mom said, sighing sadly. Then she continued, “To tell you the truth, the reason I had you come up here is to help in case I had a hard time landing.”

“But you are really good with computers and stuff. And you are way more with it than me when it comes to technology stuff,” Mom said, pleadingly. Then she began to cry. “Please. I really don’t know what I’m doing. Can you get us down?”

Not knowing what else to do, I acquiesced and we shuffled around to switch seats. I was settling in, looking at the millions of control buttons all around me, when we came out of a low cloud. We were banking sharply, the plane was practically sideways. I could see the tops of buildings, only 500 feet below.

“MOM! You were in the middle of a turn when we switched? Mom!”

A warning bell began to ding. Numbers on a dial were moving really fast. Lights were flashing all around. Something began buzzing. I knew we were loosing altitude fast.

“What do I do,” I yelled in panic, stomping on a peddle that looked like a brake.

“Oh NO! Why did you do that? That’s the bad weather pedal,” Mom yelled.

The plane began shaking like mad, the ground was coming up super fast…. and then I woke up.