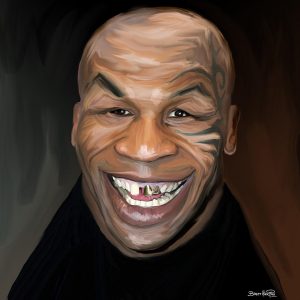 So I was murdered by Mike Tyson last night, thanks to my meds producing some wack dreams.

Anyway, I’d been partying at Tyson’s house. It was late and most everybody was passed out except me and Mike. Apparently he’s a recovering alcoholic, and had just been pretending to drink all night. He was angry and crying, drinking great gulps of grapefruit juice from the container, searching his bar for vodka with juice running down his chin.

I was trying to push him away, trying to save him from himself.

“No man, America doesn’t hate you! We love you, man. America loves your kind of story. You came up on the mean streets and made something of yourself! You’re a hero! The best heroes have to fall so they can rise again. That’s all, man. You just have to rise again. But lay off the ears this time. What kind of idiot eats another man’s ear?”

When he turned to look at me, his eyes were bright red and he grew long fangs. I couldn’t breath, I knew I was about to die. That’s when I woke up…

Today’s post was brought to you by this badass compilation: